The death of one person has been confirmed following Saturday’s building collapse at the North Industrial Area in Accra.

The Mayor of Accra, Mohammed Nii Adjei Sowah, told Citi News that a rescue team found the body of the deceased under the rubble in the early hours of Sunday.

“We were there until after midnight and later found the body and later took it to the morgue.”

The warehouse, which was under construction, collapsed injuring seven workers at the site.

The seven were taken to two separate hospitals – the Korle Bu Teaching Hospital and a hospital at Alajo.

Ten others escaped the collapse unscathed.

The Mayor added that engineers from his outfit were working with officials of the Fire Service, NADMO, and the police to determine the cause of the collapse in order to inform possible sanctions.

“When the incident occurred, we quickly called for the emergency services which include the fire service – and I must commend them for the good work that they did. NADMO also came, the police also gave protection with their crime officers and our engineers were also on site.”

“These agencies put together are preparing a preliminary report to inform us on what actually caused the accident and that will also guide us on our next line of action.”

When asked what could have caused the collapse, Assistant Senior Disaster Control Officer at the National Disaster Management Organisation (NADMO), Isaac Forson, told Citi News that”the horizontal woodwork may not have been strong enough to carry the weight from the floor.”

When he visited the scene of the incident earlier, the Mayor suggested that preliminary checks had revealed the collapse might have been as a result of negligence from the contractors.

He also stated that work had earlier been stopped at the warehouse after he paid a visit to the site, and noted that construction was going on without a permit. 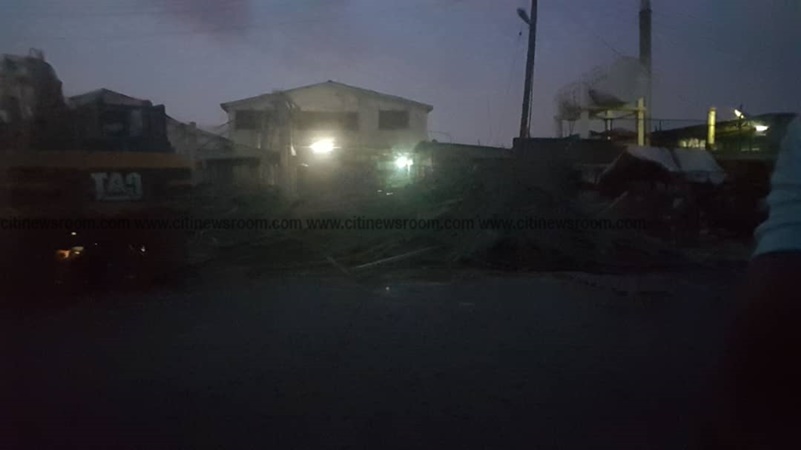 He added that “sanctions will apply” if it was determined that the contractors had proceeded without acquiring the necessary permits.

“There were some structural defects that technically, they had not taken care of. The contractors have not said anything convincing yet.”